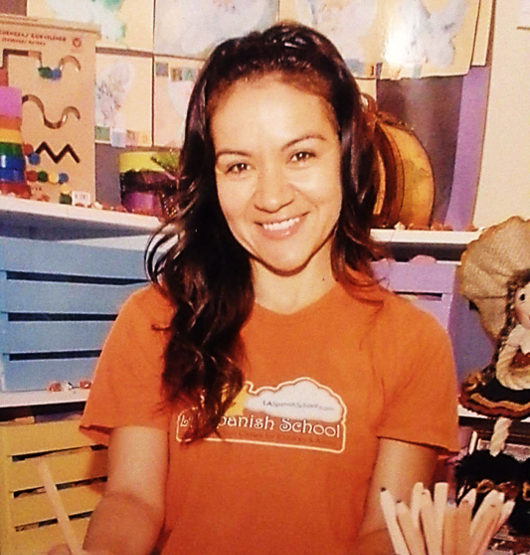 The founder and director of LA Spanish School, Diana Albarracin, is a native Spanish speaker raised in Colombia. She is an innovator in teaching Spanish as a second language, developer of curriculum and passionate about encouraging interest in younger children regarding the reading and writing acquisition and learning process. She studied in the Universidad Distrital Francisco José de Caldas in Bogotá, Colombia, earning a bachelor’s degree in Title of Licentiate in Modern Languages: Spanish and English, in 2005. Her degree is equivalent to the Bachelor of Arts in Modern Languages: Spanish and English awarded by regionally accredited colleges and universities in the United States. She was deeply moved by listening to farming families’ experiences with violence, and thus, her thesis “Literacy proposal directed to adults in state of forced displacement” incorporated these families’ stories and the learning process of reading and writing for both children and adults. Diana has more than 15 years of experience in teaching Spanish as a second language in different schools throughout Los Angeles. This includes charter schools, public progressive schools and private schools. She is passionate about seeing her students’ growth in understanding, speaking and writing in Spanish as a second language. In the youngest pupils, not only speaking but reading and writing too. This passion practically encourages her interest to move forward and keep learning from her students; hence rewarding them by providing them with a didactic and meaningful curriculum to immerse them into the Spanish language through the LA Spanish School Program.

Any cookies that may not be particularly necessary for the website to function and is used specifically to collect user personal data via analytics, ads, other embedded contents are termed as non-necessary cookies. It is mandatory to procure user consent prior to running these cookies on your website.

Write me if you want to know more about us, our programs and events .. ☀️📚✍🏻